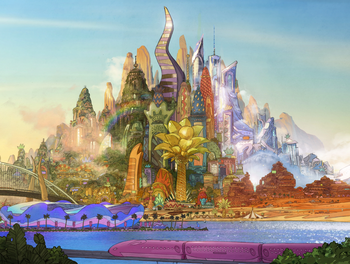 Zootopia is home to many different species of animals, so different temperature zones are a must.
Advertisement:

In fictional settings, authors often decide to make great cities for their work. In "classic" sci-fi the city served as a common trope to be used to represent whatever society that existed. They, when animated, drawn, or otherwise shown a Design Student's Orgasm usually occurs. This comes in two flavors and is often the capital of The Federation, The Alliance, The Empire, or The Republic. Is usually a City of Adventure. If part of its coolness comes from bright lights, it may be a Neon City.

These cities come in two flavors: