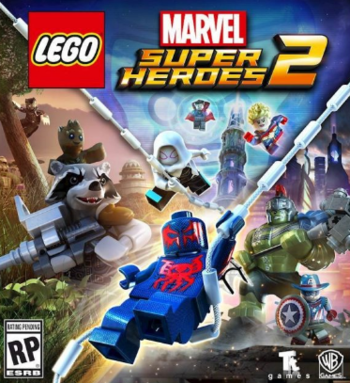 While its predecessor focused on a cosmic plot involving Doctor Doom and Galactus, LEGO Marvel Super Heroes 2 features a time travel/multiverse plot with Kang the Conqueror as the main antagonist. The game itself takes place in Chronopolis, a temporal mis-mash of several locations across different universes and time periods ruled over by Kang, including Wakanda, Xandar, Nueva York, The Wild West, Ancient Egypt, and Sakaar, which our heroes must traverse in order to find a way get into Kang’s Citadel and end his reign.

In addition to most of the main cast returning from the last game, the game features new characters such as Wasp, the Guardians of the Galaxy, the Inhumans, Spider-Gwen, Spider-Man 2099, Captain Marvel, Ms Marvel, and even a cowboy Captain America.