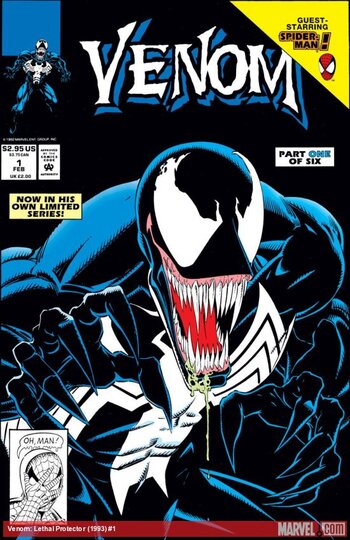 Venom is a fictional character — or rather, two fictional characters — that originated in Marvel Comics in 1984. Spider-Man, AKA Peter Parker, unwittingly bonded to an alien symbiote during the first Secret Wars and brought it to Earth thinking it was just a cool shapeshifting costume. Upon discovering it was alive and sentient, he rejected it and it later bonded to disgraced reporter Eddie Brock, who blamed Spider-Man for the ruination of his life, and thus Venom was born. Since then, the symbiote has bonded with several other hosts, including Angelo Fortunato, Anne Weying, Mac Gargan, Flash Thompson and even Carol Danvers.

Owing to the character's popularity, Venom has appeared in Spider-Man and Marvel-related media outside the comics, starting with the Spider-Man and Venom: Maximum Carnage video-game and the Spider-Man animated series. In the years since, the range of Venom's media appearances has grown to include not only comics but novels, video-games, movies, and even anime and manga.

Venom's appearances in various media include: