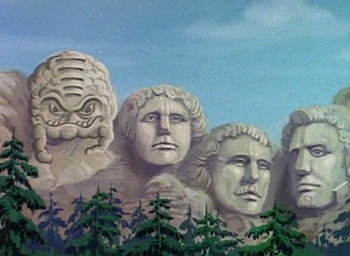 "So that's their plan? They wanna put Krang's face up there and scare the country into submission!"
Advertisement:

Villains, especially cartoon villains, are remarkably narcissistic and prone to childish vandalism. Whenever there's a landmark with a famous face on it, there's a good chance the villain will demonstrate his need for attention by putting their own face on it instead (or some ridiculous caricature of a real face, to emphasize their whimsicality). Mount Rushmore (an American landmark which features U.S. Presidents Washington, Jefferson, T. Roosevelt, and Lincoln) is an especially frequent target of this. The Statue of Liberty and the Great Sphinx of Giza are other popular venues for refacement.

An alternative, less sinister refacement would be simply adding more heads, either for parody purposes or of notable future presidents. Though this would be difficult, especially if the new heads are to the same scale as the existing ones because the best spots on the mountain are already taken.

Heroes sometimes do this, intentionally or not.

Compare Monument of Humiliation and Defeat, Monumental Damage, Deface of the Moon. Might overlap with Mock Hollywood Sign.