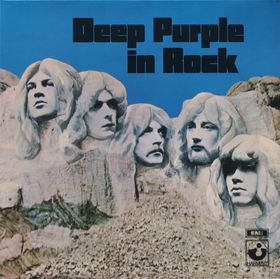 Deep Purple in Rock is the fourth studio album by Deep Purple, released in 1970. It is their first album with the classic "Mark II" line-up. Founding lead vocalist Rod Evans and founding bassist Nick Simper were fired from the band and replaced by Ian Gillan and Roger Glover, both from Episode Six. Guitarist Ritchie Blackmore then took point with regards to the band's creative direction from keyboardist Jon Lord, which led to a switch to a Hard Rock sound, often bordering on Heavy Metal. The band did not forget their progressive roots however, and thus long solos by both Blackmore and Lord or a series of shorter but alternating solos dominate the record.

The album had a 25th anniversary re-release in 1995, featuring plenty of bonus content - among them "Black Night", one of Deep Purple's greatest hits which had only been released as a single before.