Music / Concerto for Group and Orchestra 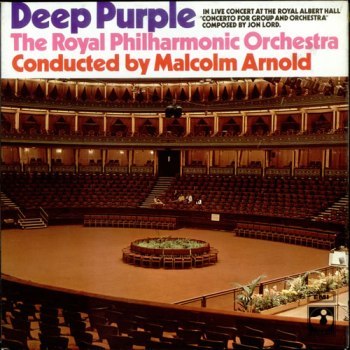 Come and listen! We saved you a seat.
Advertisement:

Concerto for Group and Orchestra is the debut live album by Deep Purple, released in 1969. It is a collaboration with the Royal Philharmonic Orchestra, conducted by Malcolm Arnold.

At the time of its release, it surprised many, because it was the first mainstream collaboration between a rock band and a classical orchestra.note  That is, if you don't count Frank Zappa, who already worked together with a classical orchestra on his solo album Lumpy Gravy (1968) and also performed live on stage with the London Philharmonic Orchestra in 1968 at the Royal Albert Hall in London. However, the aforementioned concert would only become available on CD on Ahead of Their Time (1993). And, of course, The Beatles also asked George Martin's help for orchestral accompaniment as early as "Eleanor Rigby" on Revolver (1966), not to mention "A Day in the Life"'s exploding orchestra on Sgt. Pepper's Lonely Hearts Club Band (1967). It paved the way for other famous rock/orchestra collaborations in the future, and likely the entire genre of Symphonic Metal.

Interestingly enough, Concerto for Group and Orchestra happened relatively early in Deep Purple's career - in fact, it's the first album officially released by the classic "Mark II" lineup. The song "Child in Time" even debuted on this album, before it was featured again in a hard rock version on Deep Purple in Rock.

In 1999, 30 years after the first performance, the concert would be performed again with a recreated score (the original score was lost in 1970).

Concerto for Tropes and Orchestra: