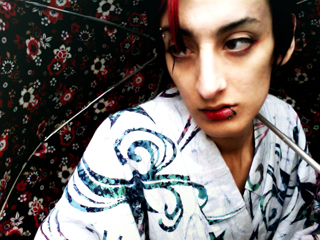 Even lesbian vampires in space can get lonely
Formed in 2009, Dr. Carmilla is a solo artist as well as fronting Dr. Carmilla & The Mechanisms. Her music is self-described as "Dieselpunk Cabaret/ Visual Kei. She is currently signed to the Gilded Age Records label/collective, who are notorious for several well-known steampunk bands, such as Unwoman, Vernian Process and the Clockwork Dolls.
Advertisement:

It has both been said that (according to the Dr. Carmilla website