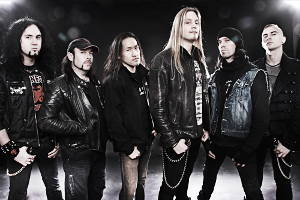 The hardest metal known to man.
Proud and so glorious
Standing before of us
Our swords will shine bright in the sky
When united we come
To the land of the sun
With the heart of a dragon we ride
—"Heart of a Dragon"
Advertisement:

DragonForce (sic) are a British band famed for their epic fantasy lyrics and energetic, over-the-top style of extreme power metal. On the other hand, they are also quite widely hated for having songs with similar structure and writing, and being perceived by some as stereotyping Power Metal as nothing more than super fast guitars, double bass drums and high pitched vocals about dragons, as well as various false accusations that they digitally speed up their playing and the occasional It's Popular, Now It Sucks!. They're best known for their appearance in Guitar Hero 3.

In March 2010, the group parted ways with singer ZP Theart. The group announced an open audition via YouTube for his replacement, and after screening thousands of applicants, selected in March 2011 native Englishman Marc Hudson as his replacement. The group's first album with Hudson was released in early 2012.

Not to be confused with the Sega Saturn game Dragon Force, although said game was the inspiration for their name - they're self-confessed video game geeks (hence video game-like sound effects in their songs).

The group's current lineup consists of:

Through The Trope And Flames:

Tropes used in their music videos:

"Through the fire and the tropes we carry on..."