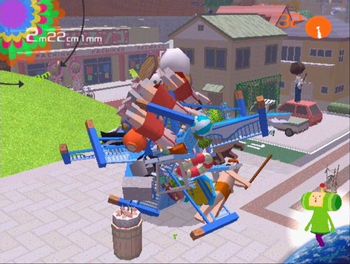 Try to put a genre on this.note Though in the process of classifying Katamari Damacy as a Widget Series, we've accidentally managed to put a genre on it.
"Life isn't divided into genres. It's a horrifying, romantic, tragic, comical, science-fiction cowboy detective novel. You know, with a bit of pornography if you're lucky."
— Alan Moore

Most creative work fits nicely into a series of classifications. We can quickly tell the difference between a sitcom and a sonnet, and we know what to expect in each one. Even if a work defies our specific expectations about tropes, it usually conforms to more general expectations about the genre. A sci-fi show can be new and different and innovative, but it can at the same time very clearly be science fiction, with a whole range of tropes assumed in that category. That's where this trope comes in.

Every so often, something comes along that just does not fit into our usual map of genres. Most of the time, these kinds of pieces get thrown out, so no one remembers them. If they're good enough though, they go on to found new genres. This means that Genre Busters are often Trope Makers for a whole range of tropes.

Of course, even genre busters are not entirely original but they are original enough—and powerful enough—that they appear to transcend genre. Categories like the broad Speculative Fiction and the hybrid Science Fantasy exist so that works can be filed somewhere, but these often fail to capture the feel of a genre buster.

The difference between Genre Roulette and Genre Busting is the difference between content and premise respectively. If the premise of your story is that five hundred years in the future, a fight between two large factions occurs while there is a third faction manipulating them behind the scenes, then congratulations, you've just made a genre busting Sci-Fi Conspiracy Thriller War Story. Now let's say you focus on three characters within that story; one character is in a forbidden relationship with someone from the other side of the war, one is growing more mature from their experience with the war, and another is investigating clues that lead back to the manipulative third faction. Now you are running a roulette between a Star-Crossed Lovers story, a Coming of Age arc, and Mystery Fiction.

Compare Genre Mashup, when a work combined existing genres. Also compare From Clones to Genre, Postmodernism (playing around with a genre) and X Meets Y (creating new genre out of two old ones). 90% of the time, you will find Mind Screw within them, with the other 10% just weird. Compare and contrast Genre-Killer. For a character see Ninja Pirate Zombie Robot. However, there's a lot of overlap; those who play heavily into mixing genres end up being very difficult to classify.