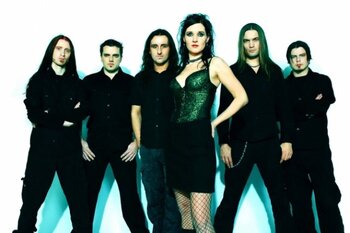 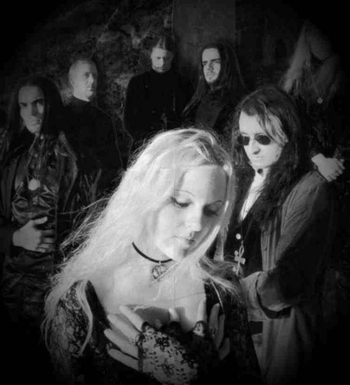 Theatre of Tragedy was a Norwegian metal band originally assembled in 1993, whose earlier albums are among the seminal works of the Gothic Metal genre. They helped pioneer the technique of Soprano and Gravel: while not the first to use it (Celtic Frost, Paradise Lost, and The Gathering did it before them), they were the ones to popularise it, as well as the first to give equal prominence to the male and female vocalist, resulting in the technique being a staple of the genre, possibly to the point of overuse.

Their first three albums featured growled vocals and lyrics written predominantly in Early Modern English. From Musique onwards, the band abandoned Early Modern English lyrics and death grunts, also switching to industrial rock for two albums. They returned to Gothic Metal on Storm, though it was more modern-sounding than their first three albums and still had modern English lyrics. Their final album, Forever Is the World pays tribute to all the styles they had played, while still giving them a more contemporary Gothic Metal sound.

The band split on October 2nd, 2010, 17 years to the day after forming, with a concert in their hometown of Stavanger, Norway, which was recorded and released as a farewell CD/DVD.

Tropes about the band: