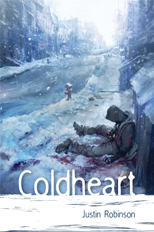 The wendigo's victim
League of Magi is an urban fantasy series of novellas and short stories about a loose organization of powerful wizards and their supernatural minions. The stories have the flavor of mafia, noir, and spy stories. It's not uncommon for the hero of one story to appear as a villain in another. Thus far, these consist of Coldheart

and The Daughter Gambit

League of Magi provides examples of: