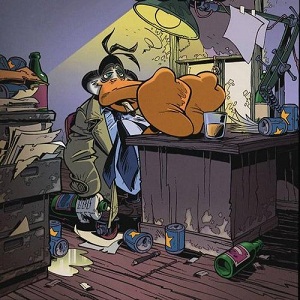 Canardo, hard at work as usual.
"I'm a damn good copper — probably the only thing I was ever good at."
— Francis Maguire, Copper
Advertisement:

The greatest challenges a detective faces aren't always a devious criminal or a really tough case — all those are a cakewalk compared to managing their personal life.

The genius ones are nerds with trouble getting along with people or worse, have social or personality disorders. The hard-working ones are workaholics who let their family relationships slide because they're never home. The overworked and nervous ones dabble in drugs and court substance addictions (or blood). The Film Noir detective and his descendants have terrible luck with women, who either end up dead, broken or distant; if he has a wife he may be cheating on her. And gods help him and his friends if some of the bad guys or associates that they helped put in the clink come back to haunt him. And his personal finances are probably gone thanks to being The Gambling Addict.

In short, it's rare to have a detective as a main character in a dramatic story and have them not have at least one serious character flaw that's tangential to them actually working cases.

Not to be confused with Clueless Detective; he's definitely not clueless, though not quite great either. Still, compare Hardboiled Detective.

See Also: Achilles' Heel, Bunny-Ears Lawyer, and Why Did It Have to Be Snakes?. Related to Dysfunction Junction.