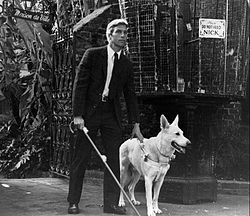 Cool cane right? It only appears in the pilot episode.
Longstreet was a short lived TV series starring James Franciscus of Beneath the Planet of the Apes fame. It was created in 1971 by Stirling Siliphant, starting from a pilot movie and lasting for one season before it was cancelled in 1972.
Advertisement:

Franciscus plays the title role of Mike Longstreet, a renowned insurance investigator. During a night of partying with his wife, Ingrid, the latter discovers a champagne bottle, addressed to Mike with only the word "Because" on the note. Thinking nothing of it, Ingrid was about to open the bottle, when a bomb rigged to it blows up. The explosion kills Ingrid and robs Mike of his sight. As he tries to cope with both losses, Mike is determined to track down Ingrid's killers. He is helped by Nikki Bell, his therapist, who he later hires to be his personal assistant. As well as Duke Page, his boss at the insurance company and best friend. Lastly, Pax, his seeing eye dog, A white German Shepherd and best companion. After solving his wife's murder, Longstreet continues his old job, while overcoming obstacles in his new life.

Bruce Lee guest stars as Li Tsung, an antiques dealer and Jeet Kun Do practitioner who teaches Mike how to utilize his remaining senses to defend himself. Much of Tsung's sayings are taken directly from Lee's book, Tao of Jeet Kun Do.