Literature / One Hundred Years of Solitude 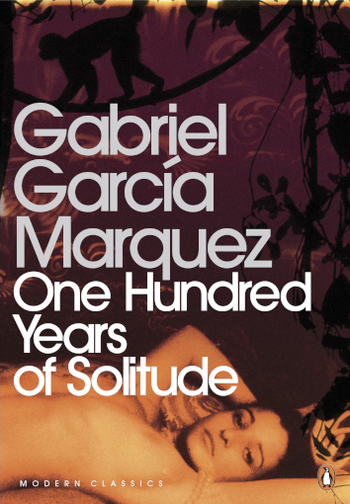 "Many years later, as he faced the firing squad, Colonel Aureliano Buendía was to remember that distant afternoon when his father took him to discover ice."
— Opening line
Advertisement:

One Hundred Years of Solitude is a 1967 novel that won Gabriel García Márquez the Nobel Prize for Literature. It's become a staple of Spanish-speaking high school curricula everywhere, mostly for being awesomely deep and so goddamn hard to understand. Arguably one of the most important pieces of literature written in the 20th century, or to put in context, almost as important as Don Quixote to Spanish speaking literature. Famous, among other things, for using every conceivable trope one could ever hope to fit in 28.8 oz of paper.

The book follows the story of the Buendía family and the town they create, Macondo, from its foundation to its end. Of course, it is told in a non-linear fashion with every generation having the same few names, as well as the same basic attributes (except for a pair of twins whose names are thought to have been accidentally switched at some point). Alongside the story of the Buendía family, there are an abundance of vignettes recounting both the everyday and the supernatural occurrences that shape the lives of the inhabitants of Macondo. The themes range widely, incorporating legendary figures (such as the Wandering Jew), historical events (Sir Francis Drake’s bombing of Rioacha, the Massacre of the Banana growers), and short stories about the love of two minor characters who never get to interfere with the main action.

Netflix has announced that it will be adapting the story into a television series.

One Hundred Years of Solitude contains examples of: