Literature / The Old Man and the Sea 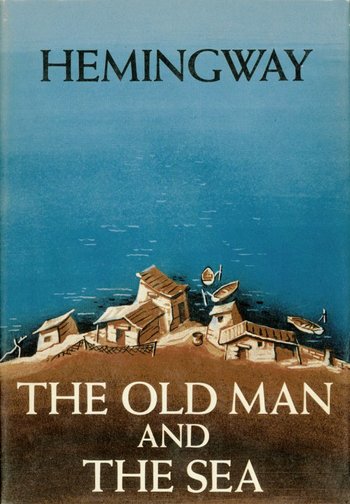 "Man is not made for defeat. A man can be destroyed but not defeated."
Advertisement:

A 1952 novella by Ernest Hemingway that tells the story of a poor Cuban fisherman of Spanish origins named Santiago who has not caught a fish in several months. He goes out to sea where he hooks a giant marlin, which he fights day and night, eventually catching it. He lashes it to the side of his boat and tries to take it home to sell. Unfortunately, it is eaten by sharks, despite the old man's valiant effort to fight them off. Defeated, the old man walks home and collapses in bed (although it can still be a moral victory, since he's proved that he can still catch fish).

Due to the symbolism, relatively easy prose and short length, The Old Man and the Sea is a mainstay of high school English courses, and is perhaps one of the most widely-read books in the United States (at least for people under thirty). It won the Pulitzer Prize in 1953 and pretty much sealed the deal on Hemingway's 1954 Nobel Prize in Literature. It was adapted into a 1958 film starring Spencer Tracy, an Academy Award-winning 1999 Russian cartoon, and a 1990 miniseries with Anthony Quinn.

The Old Man and the Sea provides examples of:

Alternative Title(s): The Old Man And The Sea