The Joy of X 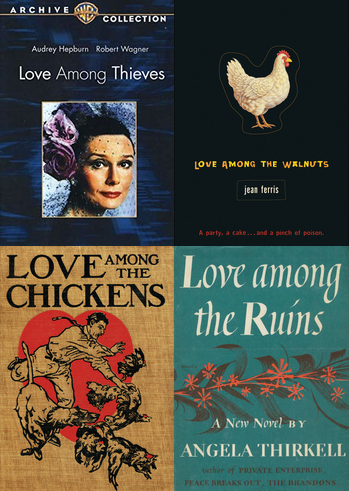 Some works have titles that are just really easy to have fun with. All you have to do is replace a word or two, and there you go - instant funny title!

With other works... Well, substitute "well-known" for "easy to have fun with", and "memorable" for "funny". After all, what better way could there be to make people remember the title of your new work than making it a Shout-Out to a William Shakespeare title?

In other words, this is about the phenomenon of the title of a work being used as a template for other titles. The key feature is that the structure of the title is distinctive enough that even when replacing one or more words, it's still obvious what the reference is.

More generally, popular phrases with a variable element used in this manner as templates are termed "snowclones". See The Other Wiki.

See also Stock Shoutouts, Memetic Mutation. If your title is a Shout-Out to something other than another title, it's a Literary Allusion Title. If it's an episode title referring to another episode title of the same series, they're Cross-Referenced Titles. For trope title examples see pretty much any Title Tropes of your choice.

Please list lots of actual examples of title variations, rather than just the template — it's more fun that way!

Examples according to original work: