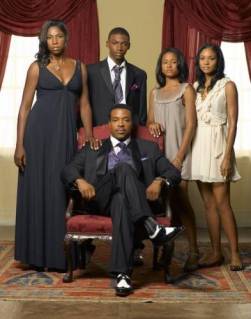 Lincoln Heights is an American drama television series that aired for four seasons (2007–09) on ABC Family.

It's about Eddie Sutton (Russell Hornsby), a Mission Vista police officer who moves with his family — wife Jenn (Nicki Micheaux), daughters Cassie (Erica Hubbard) and Lizzie (Rhyon Nicole Brown), and son Tay (Mishon Ratliff) — back to where he grew up in Lincoln Heights, Los Angeles, to start a new life and make a difference in his old neighborhood. It is a dangerous place to raise a family, and through the many trials the family goes through, they soon learn that settling in is not as easy as it seems. While Officer Sutton struggles to cope with every day life as a street cop in Los Angeles, his kids try to fit in at their new schools and with their new neighbors.

Tropes in Lincoln Heights include: