Film / The Blood of Jesus 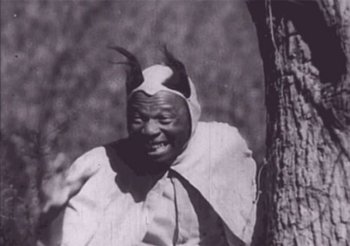 The Blood of Jesus is a 1941 American film with an all-black cast, directed by Spencer Williams.

Martha and Ras are a couple living somewhere in the rural American South. Martha has a strong Christian faith, and as the film opens, she is being baptized into the local black church. Ras (Spencer Williams), however, is not religious, and goes hunting on the morning of his wife's baptism. Afterwards, Martha tries to get Ras to accept Jesus, but he isn't interested.

Events take a tragic turn when Ras drops his gun, causing it to discharge and shoot Martha in the chest. The church choir prays and sings at her bedside, but Martha is believed to be beyond hope. An angel appears, the spirit of Martha leaves her body, and she goes on an allegorical journey to decide whether she goes to Heaven or Hell.

The Blood of Jesus is one of the most famous examples of the "Race Film", a movie made by black Americans targeted at black audiences, usually concerning racial themes. Made for $5000, it was so successful that director Spencer Williams got a contract to make a whole series of race films.