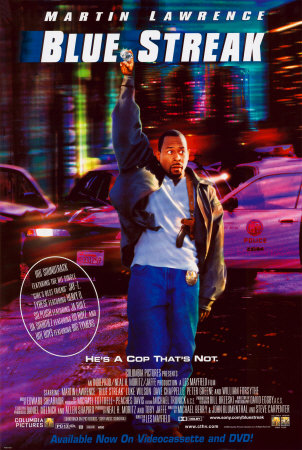 Blue Streak is a 1999 action comedy film directed by Les Mayfield and starring Martin Lawrence. The film is a remake of the 1965 British film The Big Job, although the original film is uncredited.

Miles Logan (Lawrence) is a reputed jewel thief who, along with some accomplices, successfully steals a $17 million diamond in Los Angeles. After an argument with one of the accomplices as to how the profits from the diamond should be divided among them, the police close in on them, and Logan is forced to hide the diamond in the air conditioning ducts of a construction site. He is then arrested. Two years later, Logan is released from prison whereupon he seeks to reclaim the diamond, which should still be there in the ducts. To his dismay, he discovers the construction site was that of a police station. In order to get in to retrieve the diamond, he is forced to pose as a cop. Hilarity Ensues.

Has nothing to do with Sonic the Hedgehog.