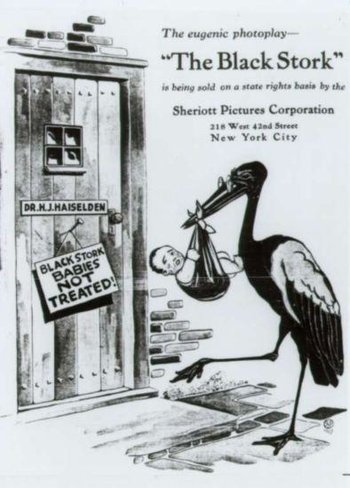 The Black Stork is a 1917 pro-eugenics film based on a story by Jack Lait and directed by Leopold and Theodore Wharton. The only surviving viewable print is of the 1927 re-release Are You Fit to Marry?
Advertisement:

Claude Leffingwell (Hamilton Revelle) and Anne Smith (Elsie Esmond) marry against the advice of the eugenicist Dr. Horace L. Dickey (Dr. Harry J. Haiselden), who warns that Claude is genetically unfit. Sure enough, their child (Henry Bergman) is born severely deformed and will require major surgery to save his life. Dickey recommends against the surgery, saying that it would only prolong the child's misery. That night, Anne dreams about the surgery to save her child and the tragic life he will lead.

The Black Stork contains examples of: