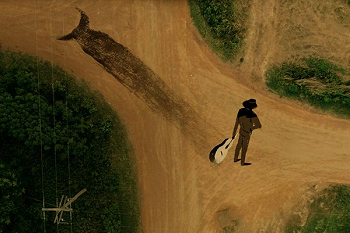 Just like bridges, crossroads often feature as the setting for portentous happenings - there's something symbolic about the (often ancient) intersection of two paths that gets people's imaginations going. Often they are used to represent the intersection between two worlds.

Crossroads also tend to represent places where a character can make a life changing decision, especially if there is conflict over which path to take.

This is very popular with Fairy Tales - especially associated with The Devil or The Fair Folk and Wicca, Voodoo, Hoodoo, Vodun and other occult magic circles. This is a common place for a Deal with the Devil. The crossroads are often chosen for safety, as there's a vague idea that ghosts, sprites and demons may find them confusing to navigate. Burying a vampire at a crossroads is one of the precautions you can take to make sure he cannot rise again.

Compare Two Roads Before You.