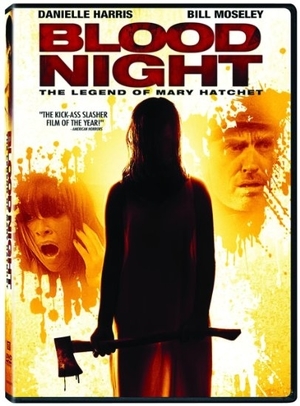 "Will you make it through the night?"
Advertisement:

Blood Night: The Legend of Mary Hatchet is a supernatural Slasher Movie released in 2009 starring Danielle Harris and Bill Moseley.

One Long Island night in 1978, after getting her first period, a little girl named Mary Mattock viciously murdered both her parents with a hatchet for no immediately apparent reason. After being found and arrested, Mary was deemed unfit to stand trial due to being found not guilty by reason of insanity, having been diagnosed with severe Menstrual Dysphoric Disorder (aka "Menstrual psychosis

"). Mary was subsequently imprisoned in the King's Park Psychiatric Hospital, only really ever exiting the catatonic state she had fallen into whenever it was her time of the month.

Roughly a decade into her imprisonment, the now grown Mary (nicknamed "Mary Hatchet") was viciously raped and impregnated by an orderly, who got away with it due to a cover-up by the higher-ups. Mary eventually gave birth, but was told shortly after the procedure that her baby had died, news which caused her to have a psychotic breakdown and run amok through the institution, killing every employee she came across with only her bare hands. Upon exiting the facility and wandering into the stormy night, Mary (carrying the severed head of the orderly who had raped her) was confronted by the police, who, after repeatedly ordering her to stand down, riddled her with bullets when she hurled the orderly's head at them and began letting out animalistic screams.

These events, along with alleged sightings of her restless spirit, caused Mary's infamy to skyrocket, and soon a pseudo-holiday dedicated to her, dubbed Blood Night, was started by local teenagers, who use it primarily as an excuse for pranks, vandalism and partying. On 2009's Blood Night, a group of high schoolers consisting of Nichole, Jen, Chris and Alex make plans for a big Blood Night bash, starting out by holding an impromptu séance on Mary's withered and desiccated grave, where the group are told some stories about her by caretaker Graveyard Gus (an example of the usual "old harbinger of doom" slasher films like so much). When the party finally gets into full swing at Jen's house, the quartet are joined by sophomores Gibbz and Tim, a couple named Tyler and Jessica, and Chris's sister Lanie, and her friends Corey and Alissa. As the alcohol flows freely and revelers start pairing off, the party is crashed by an unseen killer, who begins their spree by offing stragglers, before chasing those who remain to the now abandoned King's Park, where the survivors were dragged to by a passing Gus, revealed to have been employed at King's Park in the past, and convinced he can stop what is presumably Mary's rampaging spirit. But is Mary really responsible, or has someone else merely decided to follow her lead...?