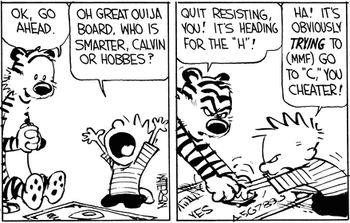 A Ouija (roughly pronounced "Weegee", not to be confused with that Weegee— or for that matter, this Weegee

) board has the alphabet, numbers, and a few short words (yes, no, goodbye) written on it, with a pointer called a planchette perched on top of it. At least two people touch the planchette and ask a question of the board. The pointer then may start to move, apparently on its own, and, it is hoped, provide an answer. Ouija boards are Newer Than They Think; they were invented in 1891 (and 'Ouija' is a trademark of Hasbro) and the idea the planchette was moved by spirits started in 1913.

The idea is that if there are spirits present, the planchette will move under their power, or someone with one hand under the table and a magnet, or someone a bit away with a remote control. It's usually one of those three. Unless magic and psychic powers are rampant in the work, someone will be accused of moving it themselves, and they will, of course, deny the charge.

In Real Life, it's believed the planchette moves because of the ideomotor phenomenon

; the people touching the pointer are moving it without realizing they're doing so. However, many people (even those only moderately spiritual) believe that even if the likelihood of contact is exaggerated by horror movies, using an Ouija board is extremely risky, hunk of plastic or not.

An older version of the "talking board" was improvised using an upturned wine glass, a reasonably smooth table, and index cards with letters written on them, but in the present day, most people interested in this sort of spirit communication buy commercial Ouija boards.

A similar game called "Kokuri-san" is played in Japan. It also requires at least two people. A tori (traditional Japanese gate) is drawn in the middle, surrounded by the alphabet, yes/no and the numbers 0-9, not unlike your usual Ouija board. A window/door is opened to allow the titular spirit in. The players place a coin on the "board" and say "Kokuri-san, Kokuri-san, please come here" or something to that effect. With the coin as a planchette, you ask Kokuri-san questions, and, in theory, said spirit moves the coin to the answer. When finished, you are supposed to say "Kokuri-san, Kokuri-san, please go home" and then destroy the paper, either by burning it or tearing it into bits, and spend the coin before the night is out. Although it is generally considered a "safer" alternative to the Ouija board, since you're less likely to randomly summon a demon instead of your dear late grandmother, Kokuri-san is a Trickster spirit and thus can (and probably will) lie to you.

Needless to say, using any of these in a horror film is inadvisable.