Overdrawn at the Blood Bank 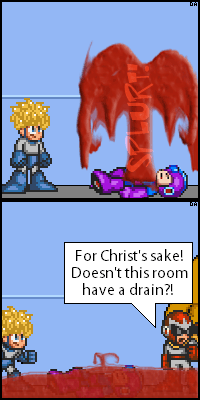 Contents under pressure.
"Yet who would have thought the old man to have so much blood in him?"
— Lady Macbeth, Macbeth
Advertisement:

The average adult male human body contains roughly five liters (one and a third gallons for Americans) of blood; blood volume is proportional to body size, but you'd be hard-pressed to find an adult with six liters. When donating whole blood, 450-500 mL (16.9 oz) is normally taken, which produces feelings of fatigue and weakness for a while, and you must wait 56 days before doing it again. Red blood cells do not regenerate all that fast; that's why we have transfusions. While people can survive losing quite a bit of blood provided they get prompt medical attention, after losing 40% or more

death is pretty much guaranteed.

But who wants to deal with all that when you're writing action (or comedy)? The more blood, the better!

Blood loss doesn't affect fictional characters so much, especially those in Video Games. No matter where they get shot or stabbed, it's "Only a Flesh Wound", even if it results in a geyser of High-Pressure Blood that releases several times the blood volume of an adult human. Usually it's the flesh wounds that are what hinder the character; blood loss is rarely shown to be a problem to those Made of Iron (maybe they use that iron to make extra hemoglobin?). This can be taken to extremes when the player, protagonist, and enemies are shot so much they paint the walls red and create pools of blood on the floor, all with no ill effects other than a scuffed wardrobe (with little or no blood on it, sorry, White Shirt of Death) and artistically dripping blood. It seems the only ounce of blood (29 mL) that matters is the last one. Compare Killing for a Tissue Sample.

Not to be confused with Overdrawn at the Memory Bank, which features a lot less blood and a lot more stupid.

Before citing something as an example, keep in mind that five liters is still more than enough to make a HUGE mess. What looks like too much blood to a person who doesn't know what a gallon and a half of liquid looks like when spilled may in fact be entirely realistic.note If you live in the USA, get a gallon and a half of milk and fling it around your kitchen. See? Sorry, cleanup is on you.