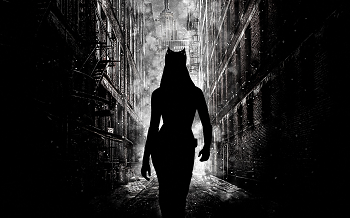 The Menacing Stroll is the lithe, athletic walk of the perennial badass. Not quite a strut, it is a subtle, confident gait that lets everyone know that the walker could kick the collective ass of everyone in the room without breaking a sweat, because they are just that awesome. The Menacing Stroll was first observed

in the Castlevania games (dubbed the Pimp Walk by fans), but it can also be found in assassins, thieves, and the leaner species of badass. It's all in the shoulders.

Compare Unflinching Walk when it's coupled with Stuff Blowing Up. Power Walk is when the heroes all do one together. A little bit faster than the Slow Walk.