A character list including Godzilla himself and several closely related characters.

Due to Wiki Policy, this page contains numerous unmarked spoilers for each Godzilla involved. You Have Been Warned. 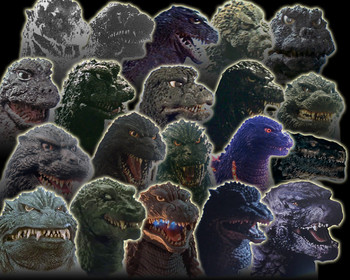 A God, for all intents and purposes.
The original Godzilla 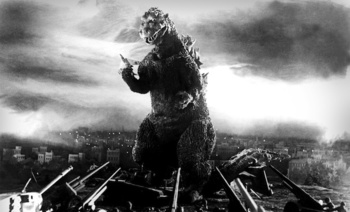 You have your fear which might become reality. And you have Godzilla, which is reality.

The original monster. A giant, prehistoric aquatic reptile who lurked in the darkest depths of the ocean, until the fateful day a nuclear weapons test destroyed his habitat, caused him to absorb massive amounts of radiation and unleashed him upon the unsuspecting world.

Born from the atomic fires, Godzilla was a metaphor for the horrors of nuclear destruction. After the death of the monster, his presence haunts the Japanese for the rest of their lives, including his successors that followed. 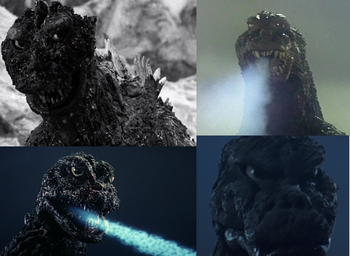 First appearance: Godzilla Raids Again, 1955
AKA: Gojira, The King of the Monsters, Gigantis, Monster Zero-One, God of Destruction, The Big G
Portrayed by: Haruo Nakajima (1955-1972; Water scene only in Son of Godzilla), Katsumi Tezuka (King Kong vs. Godzilla; water scene only), Hiroshi Sekita and Seiji Onaka (Son of Godzilla), Shinji Takagi (Godzilla vs. Megalon), Isao Zushi (Godzilla vs. Mechagodzilla), and Toru Kawai (Terror of Mechagodzilla)
"I cannot believe Godzilla is the last member of its species. But if we continue to conduct nuclear tests, another Godzilla may appear somewhere in the world again."
~ Kyohei Yamane, Gojira

The Legacy Character to the original Godzilla. Godzilla began as a neutral being, a living force of nature, but through the years he's also been a protector of the Earth, a monstrous engine of vengeance, and even a caring parent. One thing is constant, though: Godzilla is unstoppable and will face all challengers with his size, power, ferocity, and devastating atomic ray. 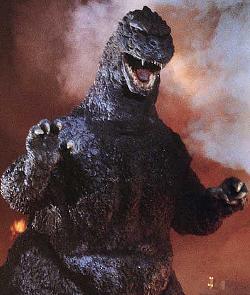 First appearance: The Return of Godzilla, 1984
AKA: Gojira, The King of the Monsters, Big G
Portrayed by: Kenpachiro Satsuna
"Godzilla is like a hurricane, or a tidal wave. We must approach him as we would a force of nature. We must understand him, deal with him, perhaps even try to communicate with him."
~ Steve Martin, Godzilla 1985.

In a separate continuity from the Showa series, Godzilla was once a mere theropod dinosaur living on Lagos Island, where it was caught in the crossfire between American and Japanese soldiers during World War II. The dinosaur chased away the American soldiers, but was mortally wounded in the process. A group of time travellers called the Futurians, seeking to prevent the creation of the original Godzilla, abducted the dinosaur and left it to die at the bottom of the Bering Sea, where it was mutated by a Soviet nuclear submarine. This Godzilla attacked Tokyo in 1984, fighting a number of foes before eventually absorbing more radiation than his body could handle and undergoing a nuclear meltdown. 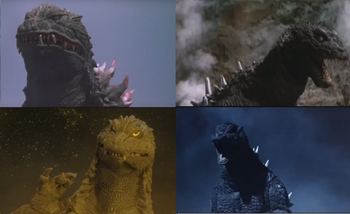 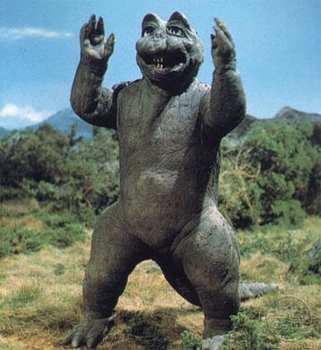 Godzilla's son in the 1950's-70's Showa series, and in the last entry of the Millennium series Godzilla: Final Wars. An enigma, his origins are unknown. Minilla's egg was uncovered by several Kamacuras on a Pacific island from inside a pile of rock. Godzilla soon appeared, having been drawn to the location by Minilla's powerful electromagnetic cries. Saving Minilla from the Kamacuras, Godzilla took the infant under his wing and began raising him (after a rough start). Minilla later faced Kamacuras, the spider Kumonga, and then participated in a giant brawl against King Ghidorah during an alien invasion. He later appeared in a young boy's dreams, and had a small but pivotal role in Final Wars. 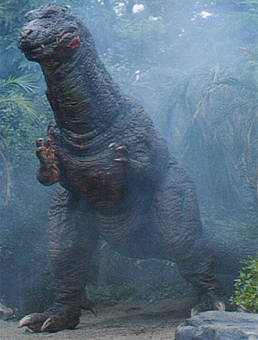 The dinosaur that would become the greatest kaiju the world has ever known, theorized by Dr. Kyohei Yamane to be an amphibious species intermediary between land-dwelling theropods and sea-dwelling marine reptiles.

In 1954, a fateful event would mutate one of the species, setting off the events of Godzilla.

During World War II, another Godzillasaurus lived on a small Pacific island that was then captured by the Japanese. American forces soon attacked the island and cornered the Japanese forces, until the Godzillasaurus appeared, chasing the Americans to the beach (and killing many of them with its feet and by knocking trees onto them). Gravely wounded by warship shelling, Godzillasaurus retreated into the jungle, having inadvertently saved the Japanese troops. A few years later the comatose dinosaur was caught in the blast of an H-bomb test and mutated into the second Godzilla, which attacked Japan in Godzilla 1985 and Godzilla vs Biollante. However, in 1992 the Futurians traveled back in time and teleported the injured Godzillasaurus to the Bering Strait, where he lay until the 1970's when the radiation of a sunken Soviet nuclear submarine revived and mutated him, and later a modern Japanese nuclear submarine stumbled upon him and was destroyed, the stronger present-day nuclear sources birthing a much larger, stronger, and angrier second Godzilla. 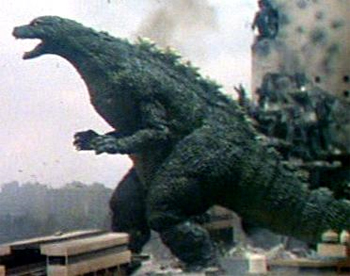 Godzilla's son in the 1990's Heisei series. Discovered as an egg on an island that was used as a nuclear waste dump site, he was taken to Japan, where he hatched. In contrast to Godzilla, Junior is a peaceful herbivore and kind to humans. He underwent large physical changes as he matured, from a very lizard-like newborn to a tubby big-eyed child to a proto-Godzilla teenager. Though killed by Destoroyah, Godzilla's meltdown released enormous amounts of radiation, which revived and empowered Junior, maturing him into a new Godzilla. 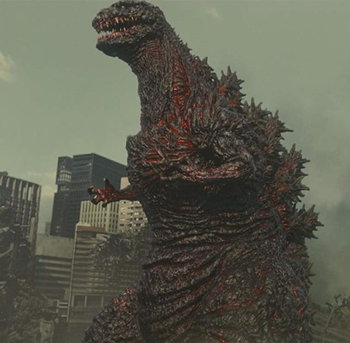 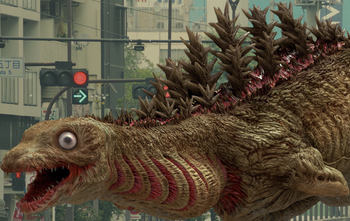 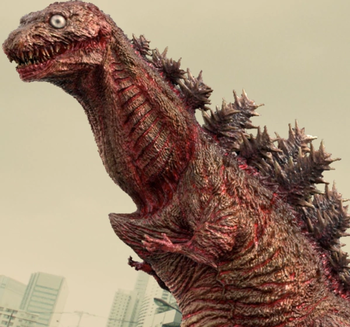 The incarnation of the King of the Monsters seen in Shin Godzilla.

Godzilla is an unknown species heavily mutated by nuclear waste in 1956 which had been gradually evolving. Unlike past incarnations, Godzilla is treated as a walking nuclear death reactor that needed to cool down to contain his radioactive properties. 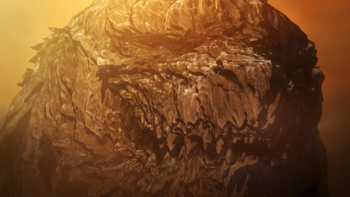 A version of Godzilla created by Hanna-Barbera, standing at approximately 122 meters tall.

A race of aliens that resemble Godzilla. 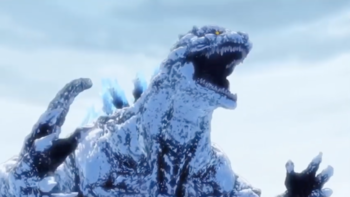 A "Giant Monstrous Beast" created by the Valhallan, Snow Godzilla attacks a ski resort in Hokkaido — creating a massive blizzard — and is confronted by Miku Hatsune,note Not that Miku, but a character based on her. and later battled by the other Shinkalion mechs.