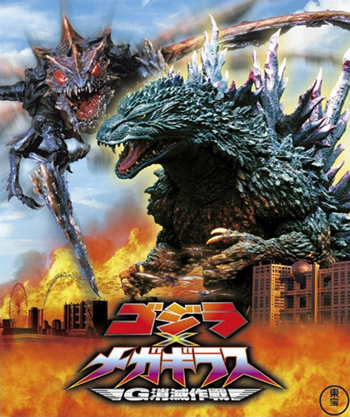 The G-Extermination Strategy... has gone horribly, horribly wrong.
The 24th entry of the Godzilla franchise and the second of the Millennium era. Another Continuity Reboot (albeit with some Broad Strokes cues from Godzilla 2000), it's a direct sequel to the first film. It involves the return of the obscure Meganulonnote While this is the usual romaji for these monsters, the creators probably intended Meganeura, an actual genus of extinct giant— though not kaiju giant—dragonflies. from Rodan and the introduction of Megaguirus, their queen and an addition to the tiny number of female monsters. Called Gojira tai Megagirasu Jī Shōmetsu Sakusen (Godzilla vs. Megaguirus: G-Eradication Strategy) in Japan.
Advertisement:

In a world where Godzilla never met his end to Doctor Serizawa's Oxygen Destroyer, his later attack on a Tokai village nuclear power plant forced the country to move to green energy. It isn't enough to power the country, so plasma energy is created. But 1996, Godzilla is attracted to it, and in his rampage, Kiriko Tsujimori's Major is killed. Swearing vengeance, Kiriko rises to an important position in newly formed G-Graspers and recruits independent technological engineer, Hajime Kudo. They plan to get rid of Godzilla through Dimension Tide, an artificial black hole that would swallow the King of the Monsters whole.

But in a test on an abandoned school, a portal is created and an egg is laid by a large insect that flies through it. A innocent boy moving to Tokyo unwittingly takes the egg; he is unable to keep it hidden, and dumps it in the sewer, where it floods Shibuya and unleashes the Meganulon upon the world. The Dimension Tide project gets derailed when the Meganulon metamorphose into Meganula and attack Godzilla to drain away his power. Godzilla escapes the black hole and moves toward Tokyo, where the Meganula who have taken his power give it to a monster that could take the King of the Monsters' place as the ultimate threat. Can Godzilla defeat the fast and wicked Megaguirus? And can the G-Graspers swallow Godzilla in the Dimension Tide when the satellite it's on begins to fall to Earth?

This film introduces the first human character to climb onto Godzilla's back in the main film franchise and begins the Millennium tradition of introducing older veterans in older, more authoritarian roles. Although it was well received by fans overall, the film tanked at the box office in Japan, selling fewer tickets than any Godzilla movie since Terror of Mechagodzilla. Like Godzilla vs. Biollante, this set the tone for reintroducing older, popular monsters in future films.