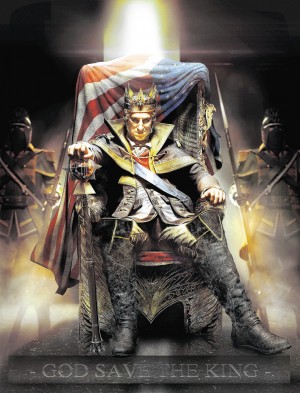 I pledge allegiance to King George I of the Most Sovereign Kingdom — The United States of America...
"In 1963's The Man in the High Castle, Philip K. Dick imagined the assassination of FDR as a 'point of divergence,' in history, triggering a domino of events starting with a weak Vice President Garner taking office. Unlike FDR, Garner maintains the stance of isolationism through the war. The Allies lose without America's help and, shortly thereafter, the Axis powers turn their attention to conquering the U.S. Which they do, in 1948."
— Cracked.com
Advertisement:

A genre of Speculative Fiction stories (sometimes called "Uchronia" or "Anachronism"), set in a world where one or more historical events unfolded quite differently than they did in the real world. Essentially, this is What Could Have Been turned into an entire narrative genre.

Often set some time after the event (called a "Point of Divergence", or POD, by fans of the genre), such stories typically describe a Present Day world vastly changed by the difference, or follow another major historical event in light of the change. Sometimes linked with a Time Travel story; the point of divergence is often caused by travelers from "our" timeline (OTL in alt-history parlance) seeking to effect a desired change. The protagonists may be original characters or actual historical figures. Lampshade Hanging occurs often in these types of stories (an Allohistorical Allusion); often, a character will stop to muse on what the world would be like if history had gone the way it did in the real world. Which, we suppose, is Truth in Television... after all, lampshading this trope is the entire point of alternate histories.

A secondary type, sometimes called "honorary alternate history", consists of Speculative Fiction stories written a considerable period of time ago, and set in a time period which has since passed. This is what happens to stories set 20 Minutes into the Future when the twenty minutes have passed. This type of unintentional alternate history has its own trope: Failed Future Forecast.

Examples of alternate history can be found in literature as far back as the 1st century BC; the Roman historian Livy wrote a treatise about what might have happened

(Ab Urbe Condita, book 9, chapters 17-19) if Alexander the Great had invaded western Europe rather than the Mideast. The genre has become increasingly popular since the late 20th century, perhaps because it was a tumultuous century rich in "what if" opportunities, though TV and movie versions are less common. And given the material, it's not beyond the imagination to consider them Fan Fiction of history itself.

In real life, Counterfactual History is a real discipline, looking at reasonable conjectures. For example, historians have carefully examined the threat of invasion of Britain by Germany in 1940 and suggested that, though British defense was rushed and rudimentary at that point, so were German attack plans. Thus, Germany would almost certainly have established a beach head, but would not have succeeded in maintaining it.note The German navy was already inferior to the British navy before the start of the war and that inferiority was made much worse by severe losses suffered by the German navy during the conquest of Norway. Thus they would have no way of stopping the Royal Navy from establishing control of the Channel and cutting off any German troops landed in England from supply and reinforcement. Unlike its literary equivalent, scholarly counter-factual history tends to focus on the short-term effects, as extrapolating long-term trends into the future has proven to be tricky even for what did happen.

It is different from an Alternate Universe, where the difference is in the fictional elements of the story. "What if Superman's ship landed in Soviet Russia?" or "What if Charles Xavier died before creating the X-Men?" are examples. However, the alternate universe may lead to alternate history as well: Alternate Reed Richards may change human society, Dr. Doom may give up ruling Latveria and begin to conquer or destroy actual countries, or Red Skull may be elected President. In those cases, the alternate history is a side consequence, not the basic premise.

Bear in mind that, other than the point of divergence and the consequences of it, the setting must still be close to the real world. A real time period filled with unrealistic stuff at all corners is not alternate history, it's something else. For example, the middle ages filled with elves, dwarves, orcs and magic is a Medieval European Fantasy, and a more modern setting with them is an Urban Fantasy. If the point of divergence is an unrealistic event (for example, "what if an advanced alien ship crashed in Germany during WWII and the Nazis got all sorts of alien tech from it?"), then see Weird Historical War.

Often, the change's ultimate source is For Want of a Nail. If "historically unimportant" characters are involved, expect In Spite of a Nail. For less drastic changeovers (such as slight differences between their world and ours), see Never Was This Universe. Some settings will undo these changes with Rubber-Band History.