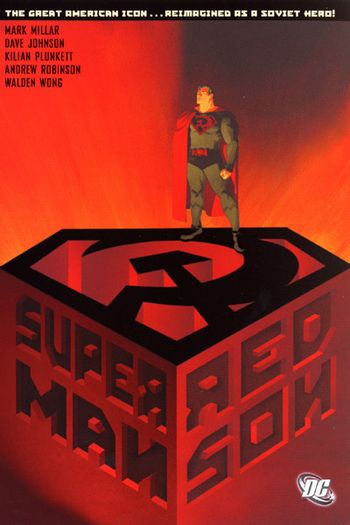 "There is only one superpower now."
Advertisement:

Everyone knows the basic story of Superman. Strange visitor from another world, who can change the course of mighty rivers, and bend steel with his bare hands. He's faster than a speeding bullet, more powerful than a locomotive, and able to leap tall buildings in a single bound. But in one universe, instead of fighting for truth, justice, and the American way, he fights a never-ending battle for Stalin, communism, and the international expansion of the Warsaw Pact.

Superman: Red Son is a DC Universe Elseworlds story, written by Mark Millar and published in 2003, that dares to imagine what would have happened if the spaceship holding baby Kal-El had landed in the Soviet Union instead of the United States, due to a small difference in the Earth's orbit compared to the main DCU. Instead of being adopted by the Kents in Smallville, Kansas, he is raised on a collective farm in Ukraine, where he discovers that he has powers greater than any man, powers he decides to use for the good of his country, and the world.

As an adult, he aligns himself with the government of Josef Stalin, protecting the citizens of the Soviet Union from even the smallest crimes and accidents, eventually succeeding Stalin as the country's leader. When the people of the United States learn of Superman's existence, they're naturally terrified, and the government turns to the smartest man in the country, scientist Lex Luthor (husband of Lois Lane), to combat this newest threat to the American way. Thus begins a superhuman arms race and a legendary battle of power and philosophies between Superman and his archnemesis.

Red Son has gained a reputation as one of the most famous, thoughtful and well-written Elseworld stories, and even regularly features in lists of the greatest Superman stories of all time.

The world of Superman: Red Son is part of the new DC Multiverse as Earth-30, presenting the possibility of Soviet Superman visiting the mainstream continuity, or vice versa.note  The last variety has already happened in Countdown Presents: The Search for Ray Palmer, although it didn't change squat. It was popular enough to receive a voiced Motion Comic and later a more traditional Animated Adaptation under the DC Universe Animated Original Movies line, released in 2020.