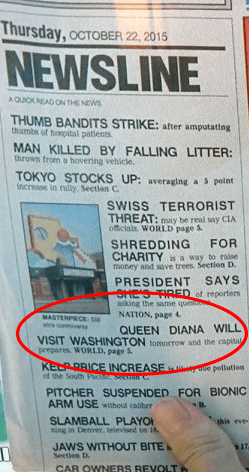 In 1989, this seemed like a reasonable thing to expect in 2015.
"Politics is the ability to foretell what is going to happen tomorrow, next week, next month and next year. And to have the ability afterwards to explain why it didn't happen."
— Winston Churchill
Advertisement:

People have been trying to predict the future for as long as human civilization, but in most cases they have been partially or completely wrong when the year in question rolls around. Sometimes, a writer inadvertently creates an Alternate History, which causes problems when referencing later events. Real life has simply progressed beyond the fictional events, meaning that the work suddenly becomes inaccurate. Adventure thrillers are especially vulnerable to this, as they are often written 20 Minutes into the Future. Sometimes, the writer will refer to later events such as 9/11, In Spite of a Nail. In other cases, what was a series of adventure novels experiences a Genre Shift and becomes some kind of science-fiction or true Alternate History.

Anything that doesn't have The Internet is prone to this, which is everything written before the mid-90s but set after. Anything vaguely similar to the 'net as we know it, tends to be limited to looking up a remote, probably centralized, database. The idea of it being a many-to-many medium doesn't seem to have occurred to many people until it actually happened.note This is mostly due to the fact that the Internet as it is today evolved, rather than being specifically developed: the designers of ARPAnet had no idea what it would become until it actually did. For examples of fictional not-quite-Internets, see The Alternet.

The science-fiction version is a special case, where dates or rates of technological advance become invalidated by the march of time. Zeerust is an aesthetic version, where "futuristic" designs wind up dated.

This is a particularly Omnipresent Trope in near-future Speculative Fiction, since the readers (and author) are usually still around when the prediction fails. If the creator is still alive they may even offer an official explanation. The fact that the prediction isn't true may be Hilarious in Hindsight or Harsher in Hindsight. See also Time Marches On, which tends more towards reactions of current audiences (e.g. a work becomes unreadable due to Values Dissonance).