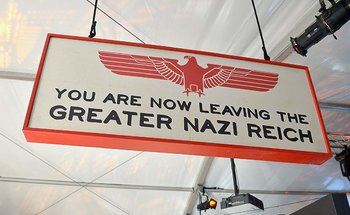 And entering the part they gave to Imperial Japan.
Wells: It's basically our earth — same history, same timeline — with one crucial and critical difference.
Stein: So let me hypothesize. The Nazis developed the atomic bomb before the United States did, and they were more than happy to use it.
Wells: Yes, the Nazis won the war.
— Crisis on Earth-X
Advertisement:

There is one truth out there that all good people of the world are very grateful for: Nazi Germany lost World War II. And we're grateful because of the retroactive recognition of how different the world would be now if the Nazis had won. In fact, this is such a universal defining truth that lots of people want to either reinforce the goodness of Nazis losing or scare themselves with stories of what might have happened, anyway.

Of course, there's different degrees to how conclusive the Nazi victory would have been, and probably a few more wars. Perhaps the Americans would have nuked the world to death, or maybe the British were a bit slow on the planes and codebreaking. And, with how peaceful Germany is now, a Nazi victory might have just meant a longer period of shit before kind of leveling out again. However, speculative fiction isn't just interested with "They won but then got defeated in the Cold War" — it also wants the dystopia. Stories of a Nazi defensive victory may also be rare because they bring up questions about how the still-existing powers that made up the Allies would have related to the Nazi state and — given the scale of Nazi atrocities, combined with the pragmatic and amoral nature of much of international diplomacy — may implicitly paint these states in a far less heroic or moral light. Given that World War II stories are often used to deliver parables or comment about the present-day world, that the war forms a large part of the national mythos of the US, UK and countries of the former Soviet Union* It was/is even called the Great Patriotic War in some of them!, and that these states' own ethno-racial and colonialist attitudes and politics at that time and other less-than-heroic aspects tend to be downplayed in narratives of the war, such portayals might be seen as politically sensitive or just plain jarring for audiences (though rare examples do exist).

Stories functioning on an outright and total Nazi victory will often include some kind of All-American resistance, as well as universal death camps (ones that everyone actually knows about) as a conflict to resist against, and a grunge-punk universe aided by not progressing from 1930s tech (unless Stupid Jetpack Hitler is in effect). The megalomaniacal architectural dreams of Adolf Hitler will often come true following the victory, with Berlin and other cities being considerably reshaped, and the gigantic Volkshalle

being built. To add spice to the story, add Imperial Japan to the mix, perhaps even expanding to an alternate Cold War between Germany and Japan.

Using this trope is typically prone to Alternate History Wank and Dated History: Nazi Germany had a lot of disadvantages and would have needed several lucky breaks just to durably win the war in Europe, never mind grow to a globe-spanning empire (and already got several breaks that would seem improbable if presented as fiction), but many classics of this subgenre (such as Trope Codifier The Man in the High Castle) were written before significant information about World War II was declassified, or without doing much research in the first place. Realistic Nazi victory scenarios have to take these disadvantages into account.

Sub-Trope of Alternate History, The Bad Guy Wins, and Villain World. Compare and contrast Commie Land and Privately Owned Society, the politicial and ideological opposite. See also Godwin's Law of Time Travel and Day of the Jackboot.

In this scenario, Nazi Germany defeats Tsarist Russia, and ends up forcing Britain to the negotiating table. They promptly hang Churchill, and send an execution squad to the protagonist's house.

In this scenario, Nazi Germany defeats Tsarist Russia, and ends up forcing Britain to the negotiating table. They promptly hang Churchill, and send an execution squad to the protagonist's house.