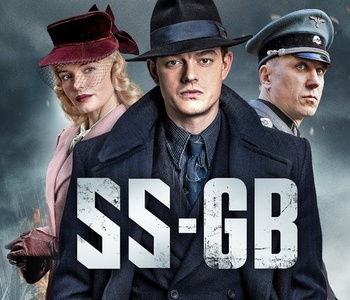 SS-GB is the television adaptation of Len Deighton's novel of the same name which was first published back in 1978. It aired on BBC One, the first episode being broadcast on 19 February 2017. It stars Sam Riley, Kate Bosworth and James Cosmo. The show aired five episodes as a mini-series.

It's set in a 1941 where Nazi Germany (with help from the Soviets, whose pact with them never fell apart, and the Italians) were able to succeed in winning the Battle of Britain campaign. In the aftermath, most of the Royal Family and government are forced to exile by fleeing to North America and Commonwealth countries in the Caribbean and Oceania. Meanwhile, the Nazis have imprisoned King George VI and executed Winston Churchill, with an interim government established.

Detective Superintendent Douglas Archer of the Metropolitan Police is called in to investigate a case of murder involving a well-known person in the black market. But afterwards, he realizes that the case is bigger than it looks when the Germans began to get involved, getting in the Met's way as he tries to figure out what the significance of the case is. Archer later finds out that it has something to do with the imprisoned monarch...