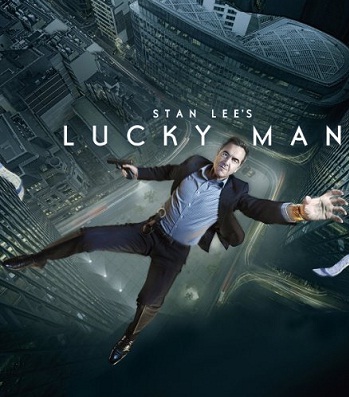 ''Hold tight. This could be a wild ride. It could be a late night. Who'll end up as the underdog and who's gonna be the lucky one?"
Advertisement:

Stan Lee's Lucky Man is a 2016 British supernatural police procedural/cop show created by Stan Lee & Neil Biswas. It airs on Sky 1 in the United Kingdom, produced by Carnival Films and is scheduled to air for 10 episodes with the first episode airing on January 22, 2016. The show stars James Nesbitt, Eva Best, Sienna Guillory and Amara Karan.

Taking place in the Greater London area, Metropolitan Police Service officer Detective Inspector Harry Clayton comes across a woman named Eve, who gives him a Tang Dynasty bronze bracelet after a one night stand. While DI Clayton gets to investigating the murder of Triad boss Freddie Lau, he gets luck and more headway than the other CLP officers thanks to the bracelet's powers to grant him luck in finding significant clues to the case. He's later warned by Eve that while he gets good luck, others will have some misfortune happen to them as a means of balancing the yin and yang.

Due to the good reception, the show has aired three seasons.