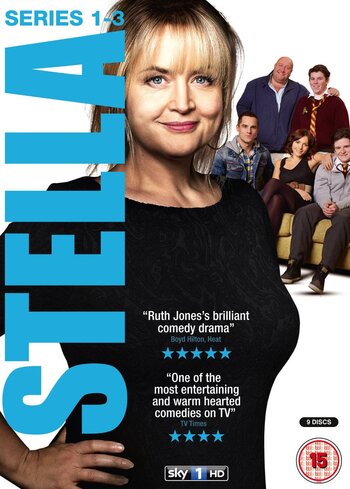 Stella is a comedy drama created, written and starring Ruth Jones (Gavin & Stacey), airing on Sky that began in 2012.

Set in the fictional Welsh town of Pontyberry, the series follows single mum of three Stella Morris and her friends and family.

Stella earns a living doing the locals' ironing. And, most of the time, she's relatively happy with life as she juggles the ups and downs of her family, amid the chaos of her eccentric friends, relatives and children's fathers. Her brood consists of eldest son Luke, a lovely boy who starts the series in prison as a consequence of joyriding; beautiful 16-year-old Emma who starts the series smitten with her first love Sunil and expecting his baby; and the brains of the family, 12-year-old Ben.

Stella's ex-husband Karl, father of Emma and Ben, has left her for new girlfriend Nadine but is involved in his children's lives. Luke's father Rob Morgan appears after 25 years, causing conflict for Stella who has recently started seeing 32-year old Sean. Stella's brother Dai is married to Paula, the local undertaker, and the two have a very kinky sex life. Paula's father, known only as "Daddy", and assistant Bobby help run Simpsons the funeral parlour. Stella's Aunty Brenda is the busybody of the town. And there's Alan, who has been in love with Stella since 1984 despite her just wanting to be friends with him.

New characters in the third series include Stella's new neighbour Michael Jackson (not that one).

Not to be confused with American TV Show of the same name.