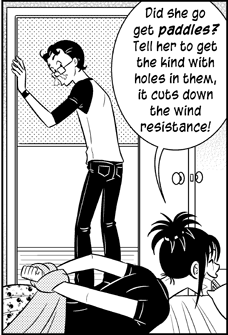 Maybe a bit too casual?
Buffy: (about Riley's lunch selection) ...a Twinkie! That's his lunch? Oh, he is so gonna be punished.
Willow: (pouting about currently being single) Everyone's getting spanked but me.
— Buffy the Vampire Slayer, "The I in Team"
Advertisement:

Sometimes sexualities such as sadomasochism and fetishism come into play without being treated as a big deal: The character just happens to be into BDSM (or similar). That is, any variant of Bondage (as in tying each other up with ropes or handcuffs), Dominance-games, and/or Sado-Masochism (as in Kinky Spanking and such). No big deal is made out of it, at least not by the main characters. This can be a good excuse to play with gender roles and power dynamics, an excuse to get the Heteronormative Crusaders all riled up, or simply a way to put a character in an unexpected situation or let a conversation take an unexpected turn.

While usually about individual characters, this trope can also be a characteristic of a Free-Love Future or similar world. In these cases, the fact that kinky sexuality is so normal that no one thinks twice about it in this world is often used as a way of pointing out how different that world is from our own.

People playing with this trope do it Safe, Sane, and Consensual, and are likely to have a Safe Word. People who see a little bit of what they are doing, without getting the whole picture, might sometimes make the classic Abuse Mistake.

Also a way to portray (or show interest in) a fetish.

Compare and contrast the tropes where kinkiness is used to indicate that a character is intelligent or a bad person. See also True Love Is a Kink. When certain non-sexual aspects of power are being sexualized, this is Power is Sexy or Power Dynamics Kink.