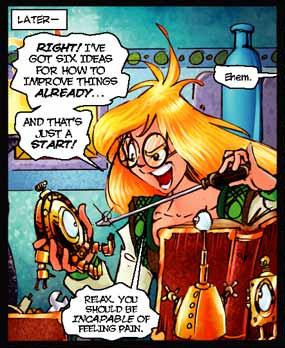 Agatha in her Madness Place
"There's a fine line between genius and insanity. I have erased this line."
— Oscar Levant

Humans have human frailties, and even a character working on something vitally important will eventually have to rest. Tiredness, hunger, or just enemies bursting into the workplace can break anyone's concentration. There are also moral reasons to stop—the experiment is a crime against nature, the "volunteer"'s crying finally gets to you, etc. Most people understand the occasional need to take a break.

Mad Scientists think that kind of attitude is for wimps.

When these guys get involved — or perhaps we should say obsessed — with a project, they ignore all distractions. The prisoner's crying? I don't hear anything. Crime against nature? I haven't been outside in ten years, so I don't really care. Food, sleep? Obstacles. And enemies jumping into the lab are like bonus "volunteers". You don't even have to hunt them down with a taser first!

Those who have found the Madness Place are very productive… for a time. Sometimes even a long time. But eventually, they come back, and have to deal with mere mortals again.

For obvious reasons, this trope is usually associated with the Mad Scientist, but it can appear alongside a Playful Hacker or other personalities. As touched upon above, those in the madness place tend to forget to eat, bathe, and sometimes talk. They may think they've said something, or think it's so blindingly obvious they shouldn't have to mention it. In a sense, It's All About Me.

Compare Happy Place. Not to be confused with the Crazy Place. Or the Cuckoo Place. May be caused by Science-Related Memetic Disorder, though going to the Madness Place isn't necessarily due to a medical disorder. Compare Neurodiversity Is Supernatural, where atypical mental conditions do more than make you good at MacGyvering superweapons.