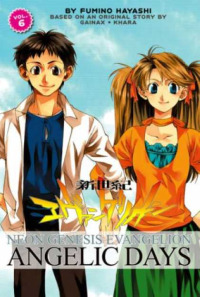 Angelic Days is a manga High School A.U. (sort of) of the cast of Neon Genesis Evangelion, written and illustrated by Fumino Hayashi. The story is an adaptation of theEvangelion tie-in video game Girlfriend of Steel 2nd. The manga was serialized in the shoujo magazine Asuka from 2003 to 2005, and compiled into six volumes.

The story of it continues Shinji's dream sequence in Episode 26 of the original series. In the High School A.U., Asuka is his childhood friend along with Kaworu, Rei is an extroverted, easily excited new transfer student, Misato is the homeroom teacher, and Ritsuko is the school nurse. Yui Ikari is still alive.

The Evangelions and Angels make up very little of the plot. Most of it is romantic comedy hijinks, and needless to say it ends much happier than the apocalyptic original series.