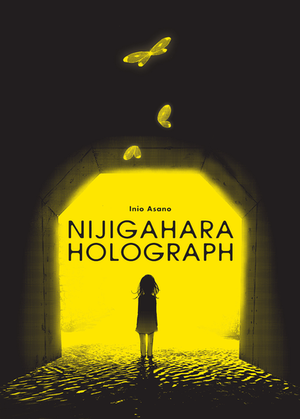 Nijigahara Holograph is a seinen Psychological Horror manga by Inio Asano. It was originally published in QuickJapan from 2003 to 2005, running for 13 chapters. Fantagraphics released its English translation in 2018.
Advertisement:

Eleven years in the past, Arié Kimura's classmates pushed her down a well into the tunnel system in the Nijigahara embankment. In the current day, those same classmates must now deal with their lives and how the psychological and emotional ripple effect of what they did has affected them. All the while, a strange prophecy first spoken by Arié about a monster that will bring about the end of the world hovers over them, and eerie butterflies are seen more and more frequently.