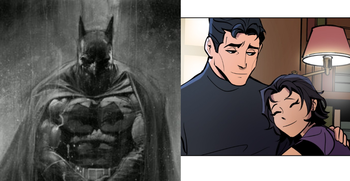 A distant, brooding vigilante in one universe, and an imperfect-but-well-meaning father figure in another.
Advertisement:

A character is happier in a derivative work than in the source material. This could be caused by the adaptation being Lighter and Softer overall, the adapters deciding to Throw the Dog a Bone, or other plot changes that mean their angst doesn't happen. This may overlap with Angst? What Angst? if the character suffers through the same things as in the source, but is strangely cheerful regardless.

Contrast Adaptational Angst Upgrade. May cause an Adaptational Personality Change. See also Adaptational Backstory Change, which may overlap with this if the character's backstory is a major cause of their angst.