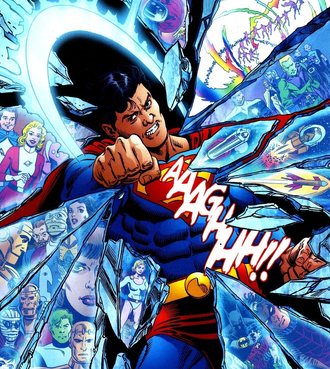 Retcon... PUUNNCHH!!!!!
"Oh, I figured everyone got blasted back to their own worlds. They probably don't remember it at all because of all the time-travel wibbley-wobbley. But you can't mess with the gooey essence of everything like that without changes happening, y'know? I bet there's still Genesis Portals out there! And there's probably even more worlds to explore! And I bet'cha at the middle of it all is some sort of nexus!"
— Sticks the Badger, narrating the final lines of Sonic the Hedgehog/Mega Man: Worlds Unite
Advertisement:

An example of a Retcon caused by forces within the story itself, usually using Time Travel of some sort to alter history. Rarely is it used purely as a dramatic device; the real function is to paper over continuity gaps and mistakes.

For example, let's say that the author of a novel series was dissatisfied at the way she'd killed off a character in an earlier book. Instead of just having him show up and explain that he was Only Mostly Dead, she has the other characters pulled back in time by an evil plan of the Big Bad; in the process, they manage to prevent the events that lead to the death of the character, and when they get back, ta-da! There he is, good as new.

Whether or not characters will remember the pre-retconned state depends on the story.

Often (especially lately), Cosmic Retconning is the go-to method for demolishing Continuity Lock-Out and drawing in a younger audience. As a rule of thumb, superhero movies are the hottest way to increase readership; thus, the new canon should conform to whatever is playing in theaters or on television. See also Ret-Canon.

A potential downside to this, of course, is that it can invoke a massive sense of Shoot the Shaggy Dog on previous stories in the franchise; and if the cosmic reset button gets hit repeatedly, it can become hard for readers to get emotionally invested in a new version because they feel it will all just get eaten by a wall of antimatter or something again before long. Moreover, if the old versions of the characters see the end coming for their world and realize that, at best, they can only save the universe by drastically changing it (perhaps erasing countless people from existence and rewriting the personalities of the survivors), the results can be pure Nightmare Fuel — and also possibly a source of severe Mood Whiplash if either the outgoing or incoming universe is notably more "carefree and innocent" than the other.

Note that this applies only to actual retcons; something like Back to the Future, where changing the past is part of the original plot, doesn't count.

Compare Internal Retcon, which is far more mundane and relies on authority figures twisting or omitting the facts. Retconjuration is the ability of a character to do this, usually only found in the hands of Reality Warpers and their ilk.