Literature / Starbright and the Dream Eater 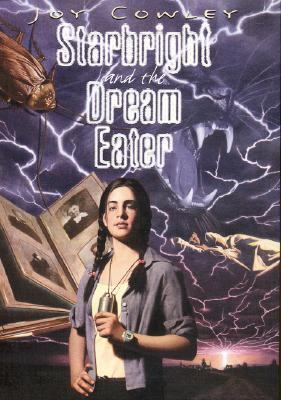 Yup, all this stuff is related to the plot.
Advertisement:

Contemporary urban fantasy sci-fi drama of sorts, with some horror. At least, it contains elements of all of those. To explain, let's start at the beginning.

Eccentric 12-year-old Starbright Connor was born to her mentally disabled mother, Esther, and adopted, being raised to think that Esther is actually her older sister. Things in her life are going fine except for a strange mysterious illness called spindle sickness that's going around. The illness causes people to have powerful, realistic-seeming nightmares when they sleep, and to wake up feeling unrested, causing them to be more likely to fall asleep longer the next time only to, again, not feel rested. Over time, the people eventually fall asleep permanently, dying in their sleep.

Meanwhile, the nurse who birthed Starbright discovers that the illness is actually an attack by an alien that came to Earth. A different alien race sent a prophecy to Earth to warn them of this alien, known as the Dream Eater, and mentions that it must be stopped by a "bright star". Unfortunately, the prophecy was written in the form of ancient Native American poetry, in a dead language, due to the fact that the aliens who wrote it were trying to write it in the native language of whatever location on Earth it was sent to, and their aim was a little off. Starbright seems to fit the prophecy's hero role, and her nurse tries to track her down. In the meantime, the Dream Eater continues to infect people close to Starbright or otherwise related to her in an attempt to kill her, and finally targets Starbright herself.

Eventually, Starbright's best friend falls victim to spindle sickness, followed by Starbright herself. In her dreams, she finds she can communicate with other people who have the illness and have some effect on them. She also seems to be either immune, or not affected as severely as everyone else, despite her dreams becoming more nightmarish and Mind Screwy. Upon finding out the true nature of the spindle sickness, she sets out to stop the Dream Eater.

Very unusual book. Contains elements of life drama, sci-fi, fantasy, and even horror in the dreams, and it all takes place in a contemporary setting. Connects its elements together in a way that fits in naturally and surprisingly works.