I Should Write a Book About This 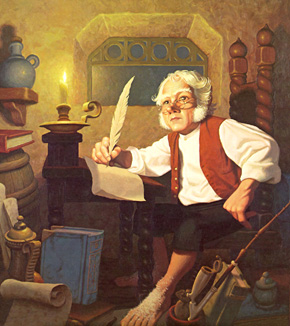 Bilbo writes his memoirs: There And Back Again: A Hobbit's Holiday
Hammond: You ever think of writing a book about your exploits in the line of duty?
O'Neill: I've thought about it. But then I'd have to shoot anyone that actually read it.
— Stargate SG-1, Pilot Movie
Advertisement:

At the end of a movie or story, a character is shown to have written a book related to the experiences in the movie, usually after they settle down and have their happy ending.

If it happens at the end of a book, the implication is that you have just read that book; sometimes it's stated a lot more bluntly. Sometimes the first thing they write is the first thing you read: the passage becomes literal Bookends.

This is usually a straight out invocation of Direct Line to the Author, with the implication that anything that doesn't quite make sense was due to the main character forgetting things, being mistaken, guessing wrong about events that they didn't personally witness, or lying for the sake of practicality.

A more recent variation more common in film and television is to end with a film or television series being produced about the events. Many times the ending itself will switch from "reality" to the film under production before the camera pulls back to reveal the set and crew. Often this will involve self-mockery by taking previously utilized tropes Up to Eleven, the story being Recycled IN SPACE! or another increase in weirdness.

May be responded to with Who Would Want to Watch Us?. If the title of the created work is also the title of the work, see Metafictional Title. Compare with Narrator All Along and Tagalong Chronicler. Write What You Know and Write Who You Know occur when an author draws general inspiration from their experiences or people in their lives. Also see Writing About Your Crime. It's for a Book is when writing becomes an excuse for dubious interests. Don't confuse with Wrote the Book, as there they may not have literally written a book.