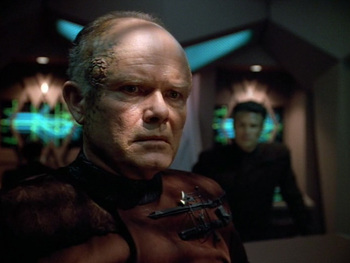 "How about you beam my foot to the bridge and I'll create a temporal disturbance in your ass!"
This is one year I'd like to forget.

Obsessed with restoring his species to greatness no matter the cost, a military temporal scientist creates changes in history that all but destroy Voyager.

This two-part episode provides examples of