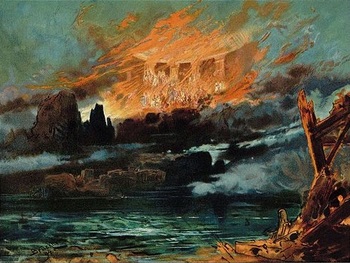 Valhalla in flames, in an 1894 depiction by Max Brückner
Fly home, ye ravens! tell your lord the tidings
that here on the Rhine ye have learned!
To Brünnhilde's rock first wing your flight!
there burneth Loge:
straight way bid him to Walhall!
For the end of godhood draweth now near.
So cast I the brand
on Walhall's glittering walls.
— Brünnhilde in Act III, Scene 3 of Götterdämmerung (translation

Götterdämmerung — German for "Twilight of the Gods"

The term was popularized by Richard Wagner in his Der Ring des Nibelungen opera cycle. This is a German translation of the Old Norse "Ragnarökkr" ("twilight of the gods"), which was itself a poetic alternate name for the Norse term Ragnarök: The "ragna" part (nominative: regin) means "gods" or "the powers" and "rök" has several meanings like "fate," "development," "relation," "cause," and, surprisingly, "origin."

Ragnarök was the story of how most of the Aesirnote a tribe of the Norse gods, the other being the Vanir and the greatest Jotuns died in a battle against each other. Similarly, this trope refers to when the gods or sufficiently advanced Precursors of a story (and possibly their enemies) either die (if they are mortal) or are Sealed In A Can (if they are immortal), usually in a large battle or some other sudden event. Frequently, this is the end result of a war between gods.

Contrast Death of the Old Gods, where the gods are either slowly disappearing or losing popularity/being replaced over a period of time, essentially going out with a whimper instead of a bang. Also, compare The Magic Goes Away. See also End of an Age/Dawn of an Era, which this trope may end up leading to.

Alternative Title(s): Twilight Of The Gods