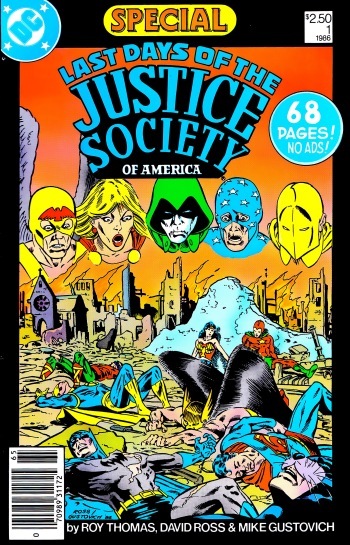 It's the final adventure of the Justice Society...for the time being.
Last Days of the Justice Society was a one-shot comic book special published by DC Comics in 1986. It was written by Roy Thomas, with art by David Ross and Mike Gustovich. It now has a trade paperback reprint with additional stories from the second Secret Origins series.
Advertisement:

The story takes place sometime after the Crisis on Infinite Earths, and as the Justice Society of America mourns for the loss of both fallen heroes who have died during the Crisis (the Golden Age Robin and the Huntress) and those who have passed on from the new Post-Crisis reality (the Golden Age Superman and Wonder Woman), the Spectre appears unto the team to reveal that Adolf Hitler has used The Spear of Destiny to link the fate of the Norse gods' Ragnarök to that of the entire universe, with the Justice Society failing to stop Hitler from doing so in 1945 and leading to the end of the world. Traveling back in time to the point where the "rip in the sky" first took place, the modern Justice Society merges with the Norse gods in Asgard to change the outcome of the battle and ensure that the universe survives.

The story was briefly recapped in Armageddon: Inferno, although parts of the story were changed to fit the Post-Crisis timeline. In that story, the JSA was rescued, and another group consisting of Abraxis' "daemens" willingly took their place, to allow them to return to the Post-Crisis DCU safely. The story was also revisited in a Tales from the Dark Multiverse issue, where different heroes tried and failed to quell the threat.

Alternative Title(s): The Last Days Of The Justice Society