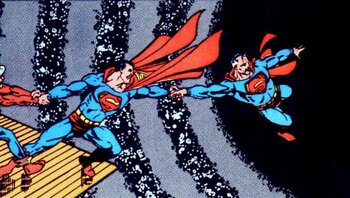 Oh, no! Pre-Crisis Superman is falling into oblivion!
"Post-Crisis" describes the state of The DCU after Crisis on Infinite Earths, in which all of the various Alternate Earths were either destroyed completely or melded into a single compound timeline, and various characters' histories were shuffled around, rebooted, or erased completely. One would speak of, for example, the Post-Crisis Superman, as opposed to the pre-Crisis Superman. Essentially a narrative device to change what was canon, and one of the first Cosmic Retcons in comics.
Advertisement:

The Post-Crisis universe has been rewritten many times since Crisis on Infinite Earths. Zero Hour: Crisis in Time!, a Crisis Crossover from 1994, was meant to resolve the various inconsistencies that had been introduced since CoIE; it failed. Later, the concept of Hypertime was introduced to substitute for the lack of Alternate Universes; it failed. The latest Cosmic Retcon is Infinite Crisis, bringing back some of the concepts jettisoned in the original.

Some of the changes which occurred Post-Crisis:

This is certainly not the full extent of the changes between pre-Crisis and Post-Crisis, but it does highlight some of the major characters. Additionally, one of the big issues with the Crisis on Infinite Earths was that, initially, almost nobody remembered the details of it, except for the Psycho-Pirate, who was ignored as insane. The problem arose, however, that writers didn't necessarily agree on what did or did not happen, which began the cycle anew.