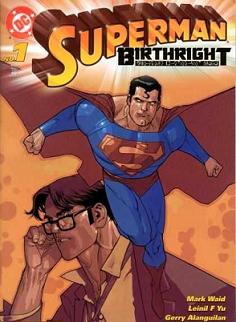 In the beginning...
"For ten thousand orbits, a clump of dirt careened around a red dwarf star. And it accomplished miracles no-one will ever remember."
— Jor-El
"Our son. The Last Son of Krypton. Let him never forget."
— Lara
Advertisement:

Superman: Birthright is a 12-issue limited series published by DC Comics, lasting from September, 2003 to September, 2004. Written by Mark Waid and drawn by Lenil Francis Yu, Birthright brought Superman and his origins into the 21st Century. Originally intended to be an alternate continuity, until the events of Infinite Crisis, it was actually retconned into Superman's canon origin, replacing John Byrne's The Man of Steel miniseries. Waid described the project as being an "Ultimate" take on the the Superman mythos. He wanted anyone, be it long-time fans or newcomers, to be able to pick the comic up and enjoy the story. Waid also placed emphasis on making Superman much more relatable and avoiding him being seen as "dull".

Beginning in the familiar setting of the doomed planet Krypton, Kal-El's parents Jor-El and Lara are forced to send their only son against the odds to a galaxy light-years away. The story quickly finds itself following Clark traveling the world to better find his place in it. Soon enough, he is inspired to become a symbol of hope for the people of Earth, assuming two new personas: Clark Kent, mild-mannered reporter, and the hero Superman.

His arrival is met with both awe and fear, with Superman now fighting to earn the trust of the citizens of Metropolis against modern cynicism and one Lex Luthor.