Comic Book / Superman and the Legion of Super-Heroes 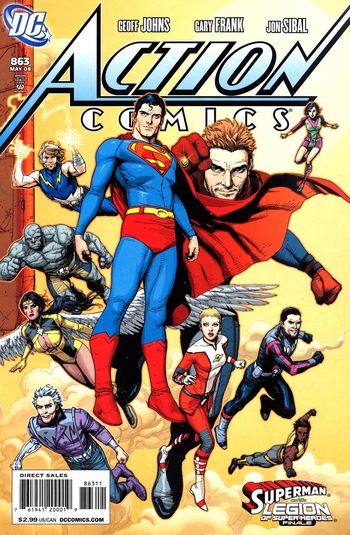 Red Sun, Magic War, it could be raining Kryptonite, I don't care. Next time you need my help, you let me know.
— Superman
Advertisement:

Superman and the Legion of Super-Heroes is a six-part Superman story written by Geoff Johns with art by Gary Frank (pencils), Jon Sibal (inks) and Dave McCaig (colors). It ran from 2007 till 2008 first appearing in Action Comics no. 858 through 863 with an epilogue in 864. It was eventually collected into a trade paperback.

It is also the second installment of a Legion Trilogy that Johns began with The Lightning Saga and will conclude with Legion of 3 Worlds.

Superman is whisked away one thousand years into the future at Brainiac 5's request to help the Legion of Super-Heroes who are in trouble. Once there he discovers that he has no super-powers because Earth's sun has turned red. Superman learns that a team of rejects from the Legion has organized itself as the new Justice League and has either incarcerated the Legion's members or pushed them underground. This new Justice League has also proscribed non-terrestrial beings from Earth (including humans of terrestrial ancestry but born outside of the planet) and propagated the version that Superman had actually been an Earthling all along. It is up to Superman to rally the Legion to fight the Justice League and recover his powers before Earth is invaded by aliens who resent the League's xenophobic policies.