Comic Book / Superman and the ThunderCats 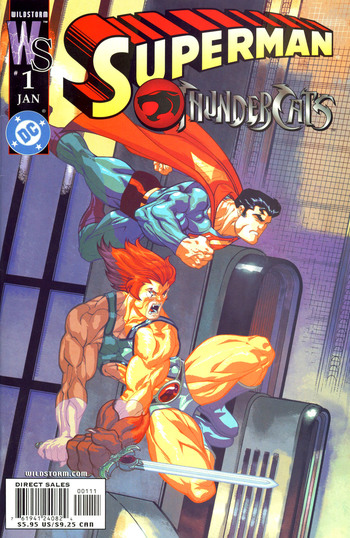 In January 2004, DC Comics published a one-shot crossover comic between ThunderCats (1985) and Superman.

Superman, the defender of Earth, meets the toughest 'Cats in a special Crisis Crossover event! While trying to stop Mumm-Ra's minions, the Mutants, from retrieving a magical stone equal in power to the Eye of Thundera, the ThunderCats are hurled into an alternate dimension, downtown Metropolis!

While searching for the Mutants, the 'Cats accidentally cause confusion and chaos all over town. It isn't long before the Man of Steel himself steps in to put a stop to thier antics. Can the Man of Steel withstand a blow from the most powerful sword in just about any universe? Will the ThunderCats be able to get back home alive?

Tropes appearing in the comic: