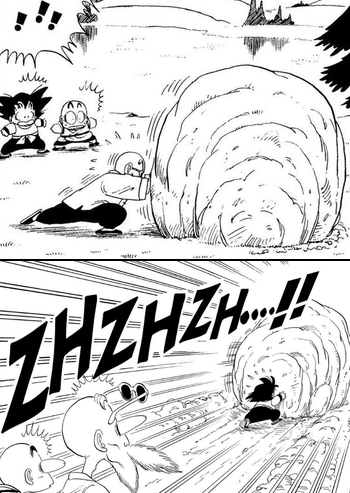 Get used to it, guys; it only goes downhill from there.
"I loved the Flash like a brother, but don’t forget where we were. That was Central City back in the day. His day. … It was like trying to compete with Sinatra."
— Elongated Man, Identity Crisis
Advertisement:

Where in a show or game that features ludicrously powerful people, a certain character or group of characters are overshadowed by their superior fellows and end up looking like plain crap, even though they are still very competent in comparison to your average Innocent Bystander.

Similar to Badass Normal, except they rarely get a chance to actually be badass and they are not always considered "normal" in the first place. If the creator is cognizant of this, expect a few rounds of Training from Hell to remedy this Can't Catch Up. Occasionally, they'll get their own storyline among 'real' normals, just to show how objectively badass they actually are. Unfortunately, Hard Work Hardly Works, so you can expect them to remain overshadowed throughout the show...

Of course, this makes sense for human characters playing second fiddle to someone superhuman, or even a god. Unless...

See also Muggle Power, Tough Act to Follow, and In the End, You Are on Your Own. Can cause Always Second Best, Always Someone Better, Stuck in Their Shadow, Sympathetic Inspector Antagonist. Normal Fish in a Tiny Pond may result if they end up somewhere where their ability is actually potent. Videogame gameplay version of this would be Sorting Algorithm of Weapon Effectiveness and Power Creep.